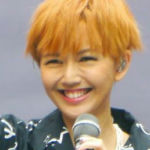 Why Is Stefanie Sun Influential?

According to Wikipedia, Stefanie Sun is a Singaporean singer-songwriter. In 2000, she released her debut album, Yan Zi, which won her a Golden Melody Award for Best New Artist. In 2004, she released her eighth studio album, Stefanie, which won her another Golden Melody Award for Best Mandarin Female Singer. Having sold more than 30 million records, she achieved popularity in Greater China and among the Chinese-speaking world.

Other Resources About Stefanie Sun

What Schools Are Affiliated With Stefanie Sun?

Stefanie Sun is affiliated with the following schools: