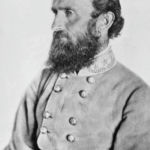 General of the Confederate Army in the American Civil War

Why Is Stonewall Jackson Influential?

According to Wikipedia, Thomas Jonathan "Stonewall" Jackson served as a Confederate general during the American Civil War, and became one of the best-known Confederate commanders, after Robert E. Lee. He played a prominent role in nearly all military engagements in the Eastern Theater of the war until his death, and had a key part in winning many significant battles. Military historians regard him as one of the most gifted tactical commanders in U.S. history. His tactics are still studied.

Other Resources About Stonewall Jackson

What Schools Are Affiliated With Stonewall Jackson?

Stonewall Jackson is affiliated with the following schools: