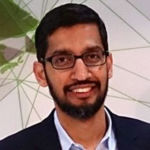 Why Is Sundar Pichai Influential?

According to Wikipedia, Pichai Sundararajan , better known as Sundar Pichai , is an Indian-American business executive. He is the chief executive officer of Alphabet Inc. and its subsidiary Google. Born in Madurai, India, Pichai earned his degree from IIT Kharagpur in metallurgical engineering. Moving to the United States, he attained an M.S. from Stanford University in materials science and engineering and further attained an MBA from the Wharton School of the University of Pennsylvania, where he was named a Siebel Scholar and a Palmer Scholar, respectively.

Other Resources About Sundar Pichai

What Schools Are Affiliated With Sundar Pichai?

Sundar Pichai is affiliated with the following schools: