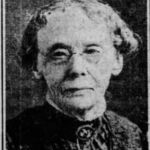 Why Is Susan Hayhurst Influential?

According to Wikipedia, Susan Hayhurst was an American physician, pharmacist, and educator, and the first woman to receive a pharmacy degree in the United States. Biography Susan Hayhurst was born in Middletown Township, Bucks County, Pennsylvania, the daughter of Quakers Thomas and Martha Hayhurst. She attended school in Wilmington, Delaware and excelled in mathematics. While still a young girl she worked as a teacher at country schools in Bucks County. Taking an interest in chemistry and physiology, she enrolled at the Woman's Medical College of Pennsylvania, and went on to graduate with a degree in medicine in 1857.

Other Resources About Susan Hayhurst

What Schools Are Affiliated With Susan Hayhurst?

Susan Hayhurst is affiliated with the following schools: