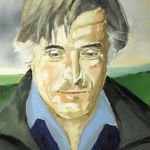 Why Is Ted Hughes Influential?

According to Wikipedia, Edward James Hughes was an English poet, translator, and children's writer. Critics frequently rank him as one of the best poets of his generation and one of the twentieth century's greatest writers. He was appointed Poet Laureate in 1984 and held the office until his death. In 2008 The Times ranked Hughes fourth on its list of "The 50 greatest British writers since 1945".

Other Resources About Ted Hughes

What Schools Are Affiliated With Ted Hughes?

Ted Hughes is affiliated with the following schools:

What Are Ted Hughes's Academic Contributions?

Ted Hughes has made the following academic contributions: