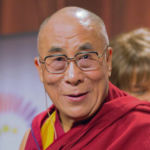 Why Is 14th Dalai Lama Influential?

According to Wikipedia, The 14th Dalai Lama , known as Gyalwa Rinpoche to the Tibetan people, is the current Dalai Lama, the highest spiritual leader and former head of state of Tibet. Born on 6 July 1935, or in the Tibetan calendar, in the Wood-Pig Year, 5th month, 5th day, he is considered a living Bodhisattva; specifically, an emanation of Avalokiteśvara. He is also the leader of the Gelug school, the newest school of Tibetan Buddhism, formally headed by the Ganden Tripa. The central government of Tibet, the Ganden Phodrang, invested the Dalai Lama with temporal duties until his exile in 1959. On 29 April 1959, the Dalai Lama established the independent Tibetan government in exile in the north Indian hill station of Mussoorie, which then moved in May 1960 to Dharamshala, where he resides. He retired as political head in 2011 to make way for a democratic government, the Central Tibetan Administration.

Other Resources About 14th Dalai Lama

What Schools Are Affiliated With 14th Dalai Lama?

14th Dalai Lama is affiliated with the following schools:

14th Dalai Lama has made the following academic contributions: