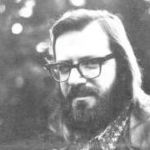 Why Is Terry Carr Influential?

According to Wikipedia, Terry Gene Carr was an American science fiction fan, author, editor, and writing instructor. Background and discovery of fandom Carr was born in Grants Pass, Oregon. He attended the City College of San Francisco and the University of California, Berkeley from 1954 to 1959.

Other Resources About Terry Carr

What Schools Are Affiliated With Terry Carr?

Terry Carr is affiliated with the following schools:

What Are Terry Carr's Academic Contributions?

Terry Carr has made the following academic contributions: