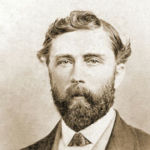 Why Is Theodore Judah Influential?

According to Wikipedia, Theodore Dehone Judah was an American civil engineer who was a central figure in the original promotion, establishment, and design of the First Transcontinental Railroad. He found investors for what became the Central Pacific Railroad . As chief engineer, he performed much of the route survey work to determine the best alignment for the railroad over the Sierra Nevada, which was completed six years after his death.

Other Resources About Theodore Judah

What Schools Are Affiliated With Theodore Judah?

Theodore Judah is affiliated with the following schools: