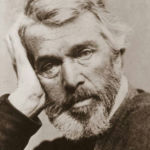 Why Is Thomas Carlyle Influential?

According to Wikipedia, Thomas Carlyle was a Scottish essayist, historian and philosopher. A leading writer of the Victorian era, he exerted a profound influence on 19th-century art, literature and philosophy. Born of peasant parents in Ecclefechan, Dumfriesshire, Carlyle attended the University of Edinburgh where he excelled in mathematics, inventing the Carlyle circle. After finishing the arts course, he prepared to become a minister in the Burgher Church while working as a schoolmaster. He quit these and several other endeavours before settling on literature, writing for the Edinburgh Encyclopædia and working as a translator. He found initial success as a disseminator of German literature, then little-known to English readers, through his translations, his Life of Friedrich Schiller , and his review essays for various journals. His first major work was a novel entitled Sartor Resartus . After relocating to London, he became famous with his French Revolution , which prompted the collection and reissue of his essays as Miscellanies. Each of his subsequent works, from On Heroes to History of Frederick the Great and beyond, were highly regarded throughout Europe and North America. He founded the London Library, contributed significantly to the creation of the National Portrait Galleries in London and Scotland, was elected Lord Rector of Edinburgh University in 1865, and received the Pour le Mérite in 1874, among other honours.

Other Resources About Thomas Carlyle

What Schools Are Affiliated With Thomas Carlyle?

Thomas Carlyle is affiliated with the following schools:

What Are Thomas Carlyle's Academic Contributions?

Thomas Carlyle has made the following academic contributions: