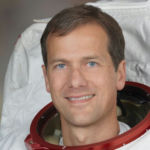 Why Is Thomas Marshburn Influential?

According to Wikipedia, Thomas Henry Marshburn is an American physician and a NASA astronaut. He is a veteran of two spaceflights to the International Space Station. Education Marshburn was born in Statesville, North Carolina. Marshburn graduated from Henderson High School in Atlanta, Georgia, in 1978. He received a Bachelor of Science degree in Physics from Davidson College, North Carolina, in 1982, and a Masters in Engineering Physics from the University of Virginia in 1984. He received a Doctorate of Medicine degree from Wake Forest University in 1989 and a Masters in Medical Science from the University of Texas Medical Branch in 1997. He trained in emergency medicine and worked in emergency rooms in Texas and Massachusetts.

Other Resources About Thomas Marshburn

What Schools Are Affiliated With Thomas Marshburn?

Thomas Marshburn is affiliated with the following schools: