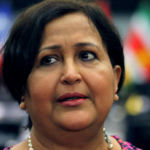 Why Is Tibisay Lucena Influential?

According to Wikipedia, Tibisay Lucena was the president of the National Electoral Council or CNE until 2020, one of the five branches of government of the Bolivarian Republic of Venezuela. She was first elected to this post in 2006, and was reelected in 2009 for the 2009-2013 period. The Supreme Tribunal of Justice appointed Indira Alfonzo on June 12, 2020 as the new president of this entity.

Other Resources About Tibisay Lucena

What Schools Are Affiliated With Tibisay Lucena?

Tibisay Lucena is affiliated with the following schools: