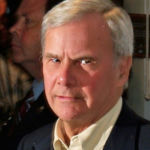 Why Is Tom Brokaw Influential?

According to Wikipedia, Thomas John Brokaw is an American retired network television journalist and author. He first served as the co-anchor of The Today Show from 1976 to 1981 with Jane Pauley, then as the anchor and managing editor of NBC Nightly News for 22 years . At this position he was one of the "Big Three anchors" along with Dan Rather and Peter Jennings. In the previous decade he served as a weekend anchor for the program from 1973 to 1976. He is the only person to have hosted all three major NBC News programs: The Today Show, NBC Nightly News, and, briefly, Meet the Press. He formerly held a special correspondent post for NBC News. He occasionally writes and narrates documentaries for other outlets.

Other Resources About Tom Brokaw

What Schools Are Affiliated With Tom Brokaw?

Tom Brokaw is affiliated with the following schools:

What Are Tom Brokaw's Academic Contributions?

Tom Brokaw has made the following academic contributions: