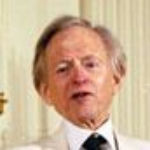 Why Is Tom Wolfe Influential?

According to Wikipedia, Thomas Kennerly Wolfe Jr. was an American author and journalist widely known for his association with New Journalism, a style of news writing and journalism developed in the 1960s and 1970s that incorporated literary techniques.

Other Resources About Tom Wolfe

What Schools Are Affiliated With Tom Wolfe?

Tom Wolfe is affiliated with the following schools:

What Are Tom Wolfe's Academic Contributions?

Tom Wolfe has made the following academic contributions: