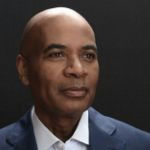 Why Is Tony Harris Influential?

According to Wikipedia, Tony Harris is an American journalist, news anchor and television producer. He was notable for his time as an anchor on Al Jazeera English, Al Jazeera America, and CNN. Early life and education Harris is a native of Baltimore, Maryland and graduated from Franklin High School in nearby Reisterstown in 1985. He went on to earn a BA degree from the University of Maryland, Baltimore County.

Other Resources About Tony Harris

What Schools Are Affiliated With Tony Harris ?

Tony Harris is affiliated with the following schools: