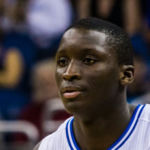 Why Is Victor Oladipo Influential?

According to Wikipedia, Kehinde Babatunde Victor Oladipo is a Nigerian-American professional basketball player for the Miami Heat of the National Basketball Association . He played college basketball for the Indiana Hoosiers, where in the 2012-2013 season he was named the Sporting News Men's College Basketball Player of the Year, the Co-NABC Defensive Player of the Year, and a first-team All-American by the USBWA and Sporting News. That year he was also named the winner of the Adolph Rupp Trophy, given annually to the top player in men's NCAA Division I basketball.

Other Resources About Victor Oladipo

What Schools Are Affiliated With Victor Oladipo?

Victor Oladipo is affiliated with the following schools: