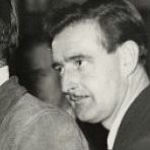 Why Is Vincent Sherman Influential?

According to Wikipedia, Vincent Sherman was an American director and actor who worked in Hollywood. His movies include Mr. Skeffington , Nora Prentiss , and The Young Philadelphians . He began his career as an actor on Broadway and later in film. He directed B-movies for Warner Bros. and then moved to directing to A-pictures. He was a good friend of actor Errol Flynn, whom he directed in Adventures of Don Juan . He directed three Joan Crawford movies: The Damned Don't Cry , Harriet Craig , and Goodbye, My Fancy .

Other Resources About Vincent Sherman

What Schools Are Affiliated With Vincent Sherman?

Vincent Sherman is affiliated with the following schools: