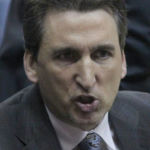 Why Is Vinny Del Negro Influential?

According to Wikipedia, Vincent Joseph Del Negro is an American former professional basketball player. He was the head coach of the National Basketball Association's Chicago Bulls from 2008 to 2010, and the Los Angeles Clippers from 2010 to 2013. Del Negro is currently an analyst with NBA TV.

Other Resources About Vinny Del Negro

What Schools Are Affiliated With Vinny Del Negro?

Vinny Del Negro is affiliated with the following schools: