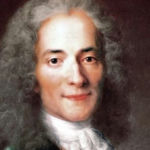 Why Is Voltaire Influential?

According to Wikipedia, François-Marie Arouet was a French Enlightenment writer, historian, and philosopher. Known by his nom de plume Voltaire , he was famous for his wit, and his criticism of Christianity—especially the Roman Catholic Church—and of slavery. Voltaire was an advocate of freedom of speech, freedom of religion, and separation of church and state.

Other Resources About Voltaire

What Are Voltaire's Academic Contributions?

Voltaire has made the following academic contributions: