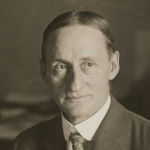 President of Northwestern university and psychologist

Why Is Walter Dill Scott Influential?

According to Wikipedia, Walter Dill Scott was one of the first applied psychologists. He applied psychology to various business practices such as personnel selection and advertising. Early life Scott was born in Cooksville, Illinois near the town of Normal, Illinois. He lived on a farm until the age of 19 when he entered Illinois State Normal University. He remained at the university for two and a half years while teaching at country schools. With the aid of a scholarship, he was able to attend Northwestern University in 1891 where he received a Bachelor of Arts degree in 1895. He desired to become a university president in China, so he enrolled at McCormick Theological Seminary; however, upon his graduation in 1898, he could not find a position. Instead, he decided to go to Germany with his wife and study psychology with Wilhelm Wundt at the University of Leipzig. While there, he received his Doctorate of Philosophy in psychology and education in 1900.

Other Resources About Walter Dill Scott

What Schools Are Affiliated With Walter Dill Scott?

Walter Dill Scott is affiliated with the following schools: