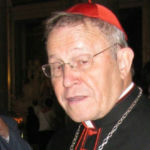 Cardinal and bishop of the Catholic Church

Why Is Walter Kasper Influential?

According to Wikipedia, Walter Kasper is a German Roman Catholic Cardinal and theologian. He is President Emeritus of the Pontifical Council for Promoting Christian Unity, having served as its president from 2001 to 2010. Early life Born in Heidenheim an der Brenz, Germany, Kasper was ordained a priest on 6 April 1957 by Bishop Carl Leiprecht of Rottenburg.

Other Resources About Walter Kasper

What Schools Are Affiliated With Walter Kasper?

Walter Kasper is affiliated with the following schools: