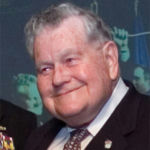 Why Is Wayne E. Meyer Influential?

According to Wikipedia, Rear Admiral Wayne Eugene Meyer is regarded as the "Father of Aegis" for his 13 years of service as the Aegis Weapon System Manager and later the founding project manager of the Aegis Shipbuilding Project Office. He retired from the United States Navy in 1985 as the Deputy Commander for Weapons and Combat Systems, Naval Sea Systems, Naval Sea Systems Command and Ordnance Officer of the Navy.

Other Resources About Wayne E. Meyer

What Schools Are Affiliated With Wayne E. Meyer?

Wayne E. Meyer is affiliated with the following schools: