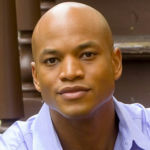 Why Is Wes Moore Influential?

According to Wikipedia, Westley Watende Omari Moore is an American author, entrepreneur, television producer, and United States Army veteran. From 2017 to 2021 Moore served as the CEO of the Robin Hood Foundation. He is currently the Democratic nominee for governor in the 2022 Maryland gubernatorial election and has been endorsed by President Joe Biden. If elected, Moore would be the first African-American governor of Maryland.

Other Resources About Wes Moore

What Schools Are Affiliated With Wes Moore?

Wes Moore is affiliated with the following schools: