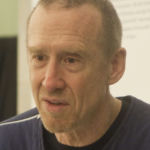 Why Is William Forsythe Influential?

According to Wikipedia, William Forsythe is an American dance and choreographer resident in Frankfurt am Main, Germany. He is known for his work with the Ballet Frankfurt and The Forsythe Company . Recognized for the integration of ballet and visual arts, which displayed both abstraction and forceful theatricality, his vision of choreography as an organizational practice has inspired him to produce numerous installations, films, and web-based knowledge creation, incorporating the spoken word and experimental music.

Other Resources About William Forsythe

What Schools Are Affiliated With William Forsythe ?

William Forsythe is affiliated with the following schools: