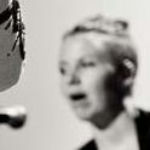 Why Is Win Butler Influential?

According to Wikipedia, Edwin Farnham Butler III is an American-Canadian singer, songwriter, musician, and multi-instrumentalist. He is one of the co-founders of Montreal-based indie rock band Arcade Fire, as is his wife, Régine Chassagne.

Other Resources About Win Butler

What Schools Are Affiliated With Win Butler?

Win Butler is affiliated with the following schools: