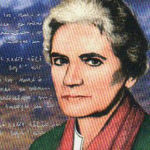 Why Is Zenta Mauriņa Influential?

According to Wikipedia, Zenta Mauriņa was a Latvian writer, essayist and researcher in philology. She was married to the Electronic Voice Phenomena researcher Konstantin Raudive. Biography Born to doctor Roberts Mauriņš, Zenta spent her childhood in Grobiņa, where, at the age of five, she contracted polio leaving her confined to a wheelchair for the rest of her life. After studying at the Russian girls high school in Liepaja , she studied philosophy at the Latvian University in Riga . After this, she studied philology of Baltic languages . She taught at the Latvian Teachers Institute and at the Latvian University in Riga and in Murmuiza, and achieved her doctorate in philology in 1938, researching the works of Latvian poet and philosopher, Fricis Bārda.

Other Resources About Zenta Mauriņa

What Schools Are Affiliated With Zenta Mauriņa?

Zenta Mauriņa is affiliated with the following schools: