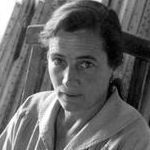 Why Is Agnes Martin Influential?

According to Wikipedia, Agnes Bernice Martin, RCA , was an American abstract painter. Her work has been defined as an "essay in discretion on inward-ness and silence". Although she is often considered or referred to as a minimalist, Martin considered herself an abstract expressionist. She was awarded a National Medal of Arts from the National Endowment for the Arts in 1998. She was elected to the Royal Canadian Academy of Arts in 2004.

Other Resources About Agnes Martin

What Schools Are Affiliated With Agnes Martin?

Agnes Martin is affiliated with the following schools: