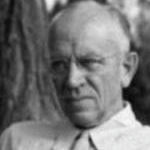 Why Is Aldo Leopold Influential?

According to Wikipedia, Aldo Leopold was an American author, philosopher, naturalist, scientist, ecologist, forester, conservationist, and environmentalist. He was a professor at the University of Wisconsin and is best known for his book A Sand County Almanac , which has been translated into fourteen languages and has sold more than two million copies.

Other Resources About Aldo Leopold

What Schools Are Affiliated With Aldo Leopold?

Aldo Leopold is affiliated with the following schools:

What Are Aldo Leopold's Academic Contributions?

Aldo Leopold has made the following academic contributions: