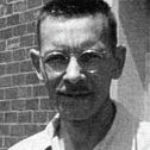 Why Is Alfred Hershey Influential?

According to Wikipedia, Alfred Day Hershey was an American Nobel Prize–winning bacteriologist and geneticist. He was born in Owosso, Michigan and received his B.S. in chemistry at Michigan State University in 1930 and his Ph.D. in bacteriology in 1934, taking a position shortly thereafter at the Department of Bacteriology at Washington University in St. Louis.

Other Resources About Alfred Hershey

What Schools Are Affiliated With Alfred Hershey?

Alfred Hershey is affiliated with the following schools: