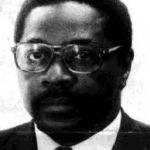 Why Is Amos N. Wilson Influential?

According to Wikipedia, Amos Nelson Wilson was an African-American theoretical psychologist, social theorist, Pan-African thinker, scholar, author and a professor of psychology at the City University of New York. Early life and education Born in Hattiesburg, Mississippi, in 1940 or 1941, Wilson completed his undergraduate degree at the Morehouse College in Atlanta, Georgia, mastered at The New School of Social Research, and attained a PhD degree from Fordham University in New York. Wilson worked as a psychologist, social caseworker, supervising probation officer and as a training administrator in the New York City Department of Juvenile Justice. As an academic, Wilson also taught at City University of New York from 1981 to 1986 and at the College of New Rochelle from 1987 to 1995.

Other Resources About Amos N. Wilson

What Schools Are Affiliated With Amos N. Wilson?

Amos N. Wilson is affiliated with the following schools: