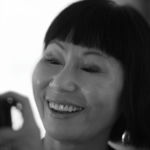 Why Is Amy Tan Influential?

According to Wikipedia, Amy Ruth Tan is an American author known for the novel The Joy Luck Club, which was adapted into a film of the same name in 1993 by director Wayne Wang. Tan has written several other novels, including The Kitchen God's Wife, The Hundred Secret Senses, The Bonesetter's Daughter, Saving Fish from Drowning, and The Valley of Amazement. Tan's latest book is a memoir entitled Where The Past Begins: A Writer's Memoir . In addition to these, Tan has written two children's books: The Moon Lady and Sagwa, the Chinese Siamese Cat , which was turned into an animated series that aired on PBS. Tan was the next scheduled guest on CNN on September 11, 2001 before regular programming was skirted to cover the terrorist attacks that day.

Other Resources About Amy Tan

What Schools Are Affiliated With Amy Tan?

Amy Tan is affiliated with the following schools:

What Are Amy Tan's Academic Contributions?

Amy Tan has made the following academic contributions: