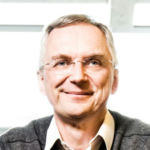 Why Is Andy Hopper Influential?

Areas of Specialization: Computer Systems, Sensor-Driven and Location-Aware Computing, Computer Technology and Sustainability
Hopper is professor of computer technology at University of Cambridge in England. He is also treasurer and vice president of the Royal Society, and is known for his success as an entrepreneur. Hopper received his degree from Swansea University in Wales, England, and his Ph.D. from the University of Cambridge.

Hopper’s research focuses on computer networks. He was part of the team that developed the Cambridge Ring, an early local area network for computer systems. He is known for his work on ActiveBadge, an indoor location system used by organizations. His work on location and network technologies has also led Hopper to contribute to the ongoing discussion about the potential problems and abuses of surveillance technology.

Hopper has founded or helped found numerous companies, including Cambridge Broadband in 2000. In 2013, Hopper co-founded TxtEz, a company that commoditizes business-to-consumer communications in Africa.

Other Resources About Andy Hopper

What Schools Are Affiliated With Andy Hopper?

Andy Hopper is affiliated with the following schools: