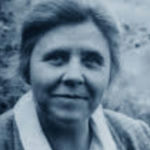 According to Wikipedia, Anna Johnson Pell Wheeler was an American mathematician. She is best known for early work on linear algebra in infinite dimensions, which has later become a part of functional analysis. Biography Anna Johnson was born on May 5, 1883, to Swedish immigrant parents in Calliope, Iowa in the United States. Her father, Andrew Gustav Johnson, was a furniture dealer and undertaker. Her mother, Amelia , was a homemaker. Both of Johnson's parents came from the parish of Lyrestad, in Västergötland, Sweden. Johnson had two older siblings, Esther and Elmer. At the age of nine her family moved to Akron, Iowa and she was enrolled in a private school. In 1903 she graduated from the University of South Dakota and began graduate work at the University of Iowa. Her thesis, titled The extension of Galois theory to linear differential equations, earned her a master's degree in 1904. She obtained a second graduate degree one year later from Radcliffe College, where she took courses from Maxime Bôcher and William Fogg Osgood.

What Schools Are Affiliated With Anna Johnson Pell Wheeler?

Anna Johnson Pell Wheeler is affiliated with the following schools: