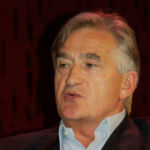 Why Is Antony Beevor Influential?

Sir Antony Beevor was born in London, England in 1946. He attended the Royal Military Academy Sandhurst before spending four years in the British Army. He is best known for his work as a military historian. His books have been translated into more than 30 different languages and are critically acclaimed. His book, Stalingrad, was the recipient of the Wolfson History Prize, the Hawthornden Prize for Literature, and the Samuel Johnson Prize for Non-Fiction.

His examination of World War II stands out for its depictions of the civilian experience. Beevor has been, at times, controversial, and been criticized for appearing too sympathetic to Nazis. Most notably, Beevor’s narrative style of writing has renewed interest in somewhat obscure topics, encouraging a re-examination of our understanding of the past. He was honored with a Lifetime Achievement in Military Writing award in 2014 by the Pritzker Military Museum & Library.

Beevor is a visiting professor for the School of History, Classics, and Archaeology at Birkbeck, University of London and at the University of Kent. He was knighted in 2017 by the queen for his support of “Armed Forces Professional Development”. His most recently published work, Arnhem: The Battle for the Bridges, 1944, was published in 2018.

According to Wikipedia, Sir Antony James Beevor, is a British military historian. He has published several popular historical works on the Second World War and other wars during the 20th century.Early life Born in Kensington, Beevor was educated at two independent schools; Abberley Hall School in Worcestershire, followed by Winchester College in Hampshire. He then went to the Royal Military Academy Sandhurst, where he studied under the military historian John Keegan before receiving a commission in the 11th Hussars on 28 July 1967. Beevor served in England and Germany and was promoted to lieutenant on 28 January 1969 before resigning his commission on 5 August 1970.

Other Resources About Antony Beevor

What Are Antony Beevor's Academic Contributions?

Antony Beevor has made the following academic contributions: