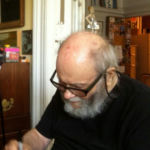 Why Is Arthur Danto Influential?

According to Wikipedia, Arthur Coleman Danto was an American art critic, philosopher, and professor at Columbia University. He was best known for having been a long-time art critic for The Nation and for his work in philosophical aesthetics and philosophy of history, though he contributed significantly to a number of fields, including the philosophy of action. His interests included thought, feeling, philosophy of art, theories of representation, philosophical psychology, Hegel's aesthetics, and the philosophers Friedrich Nietzsche and Jean-Paul Sartre.

Other Resources About Arthur Danto

What Schools Are Affiliated With Arthur Danto?

Arthur Danto is affiliated with the following schools: