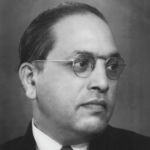 Why Is B. R. Ambedkar Influential?

According to Wikipedia, Bhimrao Ramji Ambedkar was an Indian jurist, economist and leader of the untouchables , who headed the committee that drafted the Constitution of India from the consensus achieved in the Constituent Assembly debates. He served as Minister of Law and Justice in the first cabinet of Jawaharlal Nehru from 1947 to 1951. Ambedkar later renounced Hinduism and inspired the Dalit Buddhist movement.

Other Resources About B. R. Ambedkar

What Schools Are Affiliated With B. R. Ambedkar?

B. R. Ambedkar is affiliated with the following schools: