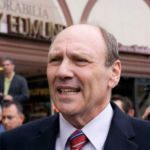 Why Is Bill Handel Influential?

According to Wikipedia, William Wolf Handel is a Brazilian-born American radio host and attorney. Handel currently hosts two radio programs on KFI in Los Angeles, California. First is KFI's local morning drive time show, in which he comments on current events. The program is one of the top rated morning programs in the Los Angeles radio market, with more than 1 million listeners. Additionally, he hosts a legal advice show on weekends called Handel on the Law, which launched in 1985 and is syndicated by Premiere Radio Networks, co-owned with KFI by iHeartMedia, Inc. Handel on The Law is heard on more than 150 stations in the U.S. He is also the director and founder of the Center for Surrogate Parenting.

Other Resources About Bill Handel

What Schools Are Affiliated With Bill Handel?

Bill Handel is affiliated with the following schools: