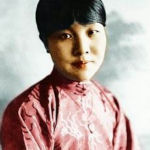 Why Is Bing Xin Influential?

According to Wikipedia, Xie Wanying , better known by her pen name Bing Xin or Xie Bingxin, was one of the most prolific Chinese women writers of the 20th century. Many of her works were written for young readers. She was the chairperson of the China Federation of Literary and Art Circles. Her pen name Bing Xin carries the meaning of a morally pure heart, and is taken from a line in a Tang Dynasty poem by Wang Changling.

Other Resources About Bing Xin

What Schools Are Affiliated With Bing Xin?

Bing Xin is affiliated with the following schools: