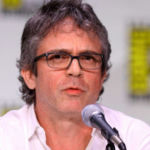 Why Is Brannon Braga Influential?

According to Wikipedia, Brannon Braga is an American television producer, director and screenwriter. Best known for his work in the Star Trek franchise, Braga was a key creative force behind three of the franchise's live action series. He later became an executive producer and writer on several Fox shows including 24, Terra Nova, and The Orville. His film credits include Mission: Impossible 2, Star Trek Generations and Star Trek: First Contact.

Other Resources About Brannon Braga

What Schools Are Affiliated With Brannon Braga?

Brannon Braga is affiliated with the following schools: