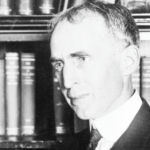 Why Is Charles A. Beard Influential?

According to Wikipedia, Charles Austin Beard was an American historian who wrote primarily during the first half of the 20th century. A history professor at Columbia University, Beard's influence is primarily due to his publications in the fields of history and political science. His works included a radical re-evaluation of the Founding Fathers of the United States, whom he believed to be more motivated by economics than by philosophical principles. Beard's most influential book, An Economic Interpretation of the Constitution of the United States , has been the subject of great controversy ever since its publication. While it has been frequently criticized for its methodology and conclusions, it was responsible for a wide-ranging reinterpretation of American history of the founding era. He was also the co-author with his wife, Mary Beard, of The Rise of American Civilization , which had a major influence on American historians.

Other Resources About Charles A. Beard

What Schools Are Affiliated With Charles A. Beard?

Charles A. Beard is affiliated with the following schools:

What Are Charles A. Beard's Academic Contributions?

Charles A. Beard has made the following academic contributions: