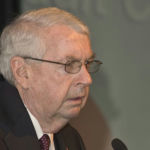 Why Is Charles J. Hynes Influential?

According to Wikipedia, Charles Joseph Hynes was an American lawyer and Democratic politician from New York who served as Kings County District Attorney from 1990 to 2013. Early life and education Hynes was born and raised, largely by his mother, Regina Katherine Hynes , in Flatbush, Brooklyn. He was estranged from his father, Harold Hynes. He was baptized Charles Aiken Hynes, but "since I was not fond of either of my given names, I chose Joe as my confirmation name when I was twelve."

Other Resources About Charles J. Hynes

What Schools Are Affiliated With Charles J. Hynes?

Charles J. Hynes is affiliated with the following schools: