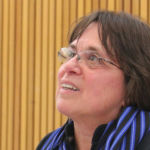 Why Is Cherríe Moraga Influential?

According to Wikipedia, Cherríe Moraga is a Chicana writer, feminist activist, poet, essayist, and playwright. She is part of the faculty at the University of California, Santa Barbara in the Department of English. Moraga is also a founding member of the social justice activist group La Red Chicana Indígena which is an organization of Chicanas fighting for education, culture rights, and Indigenous Rights.

Other Resources About Cherríe Moraga

What Schools Are Affiliated With Cherríe Moraga?

Cherríe Moraga is affiliated with the following schools: