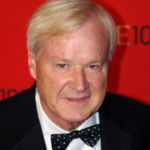 Why Is Chris Matthews Influential?

According to Wikipedia, Christopher John Matthews is an American political commentator, retired talk show host, and author. Matthews hosted his weeknight hour-long talk show, Hardball with Chris Matthews, on America's Talking and later on MSNBC, from 1997 until March 2, 2020. He announced on his final episode that he was retiring, following an accusation that he had made inappropriate comments to a Hardball guest four years earlier. On that occasion, he stated: "The younger generation's out there ready to take the reins. We see them in politics, in media, in fighting for their causes. They're improving the workplace."

Other Resources About Chris Matthews

What Schools Are Affiliated With Chris Matthews?

Chris Matthews is affiliated with the following schools: