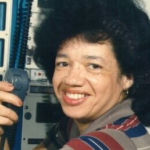 Why Is Christine Darden Influential?

According to Wikipedia, Christine Darden is an American mathematician, data analyst, and aeronautical engineer who devoted much of her 40-year career in aerodynamics at NASA to researching supersonic flight and sonic booms. She had an M.S. in mathematics and had been teaching at Virginia State University before starting to work at the Langley Research Center in 1967. She earned a PhD in engineering at George Washington University in 1983 and has published numerous articles in her field. She was the first African-American woman at NASA's Langley Research Center to be promoted into the Senior Executive Service, the top rank in the federal civil service.

Other Resources About Christine Darden

What Schools Are Affiliated With Christine Darden?

Christine Darden is affiliated with the following schools: