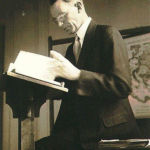 Why Is Cornelius Van Til Influential?

According to Wikipedia, Cornelius Van Til was a Dutch-American reformed philosopher and theologian, who is credited as being the originator of modern presuppositional apologetics. Biography Van Til was the sixth son of Ite van Til, a dairy farmer, and his wife Klasina van der Veen. At the age of ten, he moved with his family to Highland, Indiana. He was the first of his family to receive a higher education. In 1914 he attended Calvin Preparatory School, graduated from Calvin College, and attended one year at Calvin Theological Seminary, where he studied under Louis Berkhof, but he transferred to Princeton Theological Seminary and later graduated with his PhD from Princeton University.

Other Resources About Cornelius Van Til

What Schools Are Affiliated With Cornelius Van Til?

Cornelius Van Til is affiliated with the following schools: