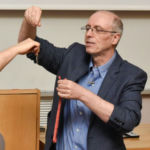 Why Is David Leigh Influential?

In particular, Leigh’s work has focused on developing methods to construct molecular motors from structures like rotaxanes, catenanes, and so-called molecular knots, all structures that can be mechanically interlocked using advanced techniques from chemistry. Interestingly, Leigh developed a mechanism known as an “information ratchet,” which has been compared to the fictional demon of Maxwell’s, the latter a thought experiment that involved thwarting the second law of thermodynamics using a device or “demon,” that can manipulate individual molecules. Of course, Leigh’s molecular motor does not violate the second law of thermodynamics! He is also known for structures that act like “walkers,” and can walk along proteins. His work has been so exciting and influential that in 2016 he was recommended for the Nobel Prize in Chemistry. However the award was to go to Sauvage, Feringa, and Stoddart, as noted in this list earlier.

Other Resources About David Leigh

What Schools Are Affiliated With David Leigh ?

David Leigh is affiliated with the following schools: