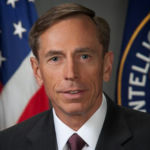 Why Is David Petraeus Influential?

According to Wikipedia, David Howell Petraeus is a retired United States Army general and public official. He served as Director of the Central Intelligence Agency from September 6, 2011, until his resignation on November 9, 2012. Prior to his assuming the directorship of the CIA, Petraeus served 37 years in the United States Army. His last assignments in the Army were as commander of the International Security Assistance Force and commander, U.S. Forces – Afghanistan from July 4, 2010, to July 18, 2011. His other four-star assignments include serving as the 10th commander, U.S. Central Command from October 13, 2008, to June 30, 2010, and as commanding general, Multi-National Force – Iraq from February 10, 2007, to September 16, 2008. As commander of MNF-I, Petraeus oversaw all coalition forces in Iraq.

Other Resources About David Petraeus

What Schools Are Affiliated With David Petraeus?

David Petraeus is affiliated with the following schools: