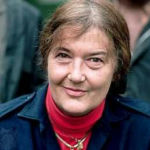 Why Is Dian Fossey Influential?

According to Wikipedia, Dian Fossey was an American primatologist and conservationist known for undertaking an extensive study of mountain gorilla groups from 1966 until her murder in 1985. She studied them daily in the mountain forests of Rwanda, initially encouraged to work there by paleoanthropologist Louis Leakey. Gorillas in the Mist, a book published two years before her death, is Fossey's account of her scientific study of the gorillas at Karisoke Research Center and prior career. It was adapted into a 1988 film of the same name.

Other Resources About Dian Fossey

What Schools Are Affiliated With Dian Fossey?

Dian Fossey is affiliated with the following schools:

What Are Dian Fossey's Academic Contributions?

Dian Fossey has made the following academic contributions: