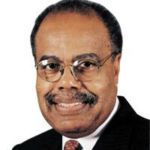 Why Is Donald McHenry Influential?

According to Wikipedia, Donald Franchot McHenry is a former American diplomat. He was the United States Ambassador and Permanent Representative to the United Nations from September 1979 until January 20, 1981. Biography McHenry was born in St. Louis, Missouri, and grew up across the river in East St. Louis, Illinois. He attended Illinois State University, graduating with a BS in 1957. He then continued on to earn a master's degree from Southern Illinois University Carbondale in 1959 and began a doctoral program at Georgetown University.

Other Resources About Donald McHenry

What Schools Are Affiliated With Donald McHenry?

Donald McHenry is affiliated with the following schools: