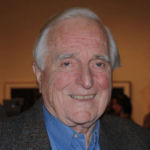 Why Is Douglas Engelbart Influential?

According to Wikipedia, Douglas Carl Engelbart was an engineer and inventor, and an early computer and Internet pioneer. He is best known for his work on founding the field of human–computer interaction, particularly while at his Augmentation Research Center Lab in SRI International, which resulted in creation of the computer mouse, and the development of hypertext, networked computers, and precursors to graphical user interfaces. These were demonstrated at The Mother of All Demos in 1968. Engelbart's law, the observation that the intrinsic rate of human performance is exponential, is named after him.

Other Resources About Douglas Engelbart

What Schools Are Affiliated With Douglas Engelbart?

Douglas Engelbart is affiliated with the following schools: