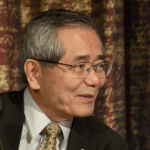 Why Is Ei-ichi Negishi Influential?

Negishi is world-renowned as a chemist. He has won numerous awards for his career in chemistry, including the Noble Prize in Chemistry in 2010. Negishi also received Japan’s high honors, in both the Chemical Society of Japan Award and the Order of Culture, in 1997 and 2010, respectively. Negishi became a Fellow of the American Academy of Arts and Sciences in 2011. The following year he became Fellow of the Royal Society of Chemistry.

According to Wikipedia, Ei-ichi Negishi was a Japanese chemist who was best known for his discovery of the Negishi coupling. He spent most of his career at Purdue University in the United States, where he was the Herbert C. Brown Distinguished Professor and the director of the Negishi-Brown Institute. He was awarded the 2010 Nobel Prize in Chemistry "for palladium catalyzed cross couplings in organic synthesis" jointly with Richard F. Heck and Akira Suzuki.

Other Resources About Ei-ichi Negishi

What Schools Are Affiliated With Ei-ichi Negishi?

Ei-ichi Negishi is affiliated with the following schools: